My friend, my soulmate, my confidante, my partner.

The dawn of the last day of the year approaches. A few hours ago I walked home from a basketball game. I made a list of things that you’d done over the year that I was thankful for. I never quite finished the list, but I’m going to tell you the most important bits.

Thank you for supporting me, even when some of my ideas stunk. You always took time to listen to what I had to say, and went the extra mile with me, honestly sharing my misplaced hope that things would pan out. When they didn’t, you never once did an “I told you so”, but you gave me strength to pick myself up and try again.

Thank you for letting me do my own thing every now and then. Tonight when I played ball, you singlehandedly watched over Anne, put her to bed, did the laundry and even hung the clothes out to dry. The laundry was my job, but I came home, saw it done and felt lousy about myself.

I went to the bedroom where you were sleeping and kissed your forehead. You opened your eyes, smiled and told me that you love me. You didn’t do the laundry to make me feel bad or ashamed, you did it out of love for me. I’m still amazed and very, very touched by that gesture.

You amaze me every moment of every day.

Thank God Anne slept beautifully last night. There was the routine leg flailing and roundhouse kicks to our midsections, but at least she did all that in her sleep.

Anne’s now 8 and a half months old. Many things have changed. She no longer takes her bath in her baby bathtub. She now takes showers standing up, hands on a tiny plastic chair we got from Ikea. She’s started babbling, at times holding eye contact and talking to us like we’re supposed to understand her point of view on global politics. She also likes looking at herself upside down in the mirror. She does this by flexing her back backwards.

So maybe it’s overstimulation from the holiday season. It doesn’t help that we have Faith’s office event tonight, a wedding dinner tomorrow night and church activities till New Year’s. Maybe we’ll play the old fogey card and retire at seven or something.

To be honest, we haven’t had a good night’s sleep for 3 days. Anne has been absolutely horrible these past few nights. It could be from overstimulation, or that she’s teething. The most probable cause is one that gives us great fear - that we’ve spoilt her rotten.

Whenever people ask me why it is that I don’t hire a maid, my answer is “because I don’t think I’m mature enough”.

Maids (the local word for live-in domestic help, usually from another country) are commonplace in Singapore. Every other family has a maid. I am constantly appalled at how generally ok people fail to see how close to slavery this is. Yes, we pay them. And yes, the pay they receive here is probably better than what they could have earned back home. Does this excuse how we treat them though?

A law was passed recently forcing employers to grant their maids the minimum of one day off a month. I’ve heard Singaporeans extolling their own virtues.

“My maid should be thankful. I give her two days off every month!”

Faith and I have decided not to hire a maid due to a few reasons. The main reason, according to Faith, is the universal law dictating that “we clean our own shit up”. It’s a perfectly legit reason. We made the mess, we clean it up. If we don’t have time to clean it up, we live in it. I’m pretty sure someday down the road I’ll be made to eat these words. When work requires 16 hours a day and I have potato chips all over my couch, it is likely I am tempted to break this self-imposed law.

My own reason for not hiring a maid is slightly different. So called “better pay” aside, we treat them like dirt. It is a common sight to see the mother of the family buying groceries from the market, the father walking a couple of meters behind prodding a stylus on some new-fangled gadget he just bought, and the maid, much futher behind struggling under numerous plastic bags of vegetables, raw meat and canned food. She’s barely able to lift the bags. Her employers shout for her to hurry up. The mother sighs and exclaims loudly that her maid is lazy and inefficient.

I don’t want to be like that. But right now I’m not sure if I have the maturity to treat a live-in domestic help with dignity. Essentially, when you hire a maid you become an employer - a manager. Not everyone has the smarts to be one, especially being one 24/7. I’m just not sure if I do.

FCKeditor - The text editor for Internet

BP says it best in her entry “ A piece of my mind for peace of mind”. Everything changes when you have kids to mind, a house to clean and work to be done. Maybe I haven’t exactly been the best father, husband, son, friend or colleague I could be.

There are times at night I’m just surprised I made it through the day.

History of the CSS Hack

Tantek reminisces over hacks and filters, and his role in them.

Typographic Style for the Web

The Elements of Typographic Style Applied to the Web - a practical guide to web typography.

When talking about user interfaces that encourage the user to sign up, it is common knowledge to remove as many obstacles hindering the process as possible. Yahoo! Mail is probably one of the smoothest interfaces out there. It was going fine for me until the interface told me to go and

I’m not superstitious or anything. But I smell Skynet’s pawprints on Web 2.0.

We were talking about new year resolutions the other day.

Many years ago I made the one resolution I actually kept; I made a resolution never to make another resolution again. It was the end to what seemed like a pirated copy of Groundhog Day.

On New Year’s day I’d promise to do all my homework, improve my grades, listen to my parents. I’d last for the first week and a half before coming to grips with reality. I had better things to do than rote writing endless lines of Chinese characters. Homework would be left undone, grades would fall and parents would nag.

The cards are on the table. We live in exciting geeky times. 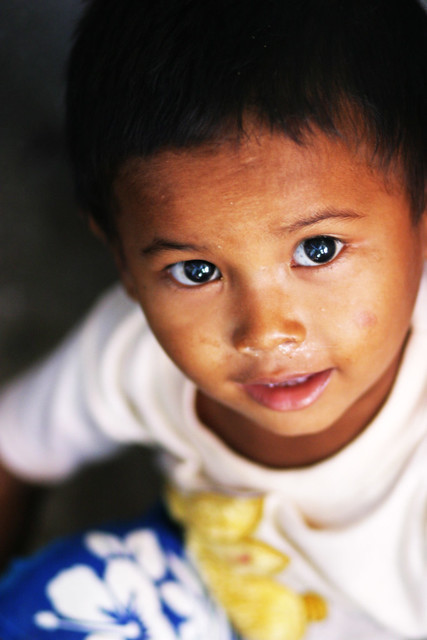 I stood there, stunned for a moment. Wow, I’ll have to think about this one.

“Yes”. I smile and nod. It was such a relief that I didn’t have to cook up the “correct” answer to the unexpected question. I was happy to be there with them.

Where our standard greeting here in Singapore is “have you eaten?”, or more accurately, “have you had your fill?”, almost every orphan I met in Myanmar asked me “are you happy?”. It is almost as if they knew something I didn’t; that they knew - without having ever set foot outside of their village - that the lives we live in comfort held within them an emptiness.

We dare not speak its name. We do not ask each other if we’re happy. It is such an odd paradox, going by Maslow’s famed hierarchy of needs. We in the developed countries ought to be seeking high level goals like self-actualisation and what-not. These orphans in third-world Myanmar should be obsessed with low level goals like having food and shelter.

And yet there we were, interchanged. They had little else but happiness. We had plenty, but were found wanting.

While in Myanmar Mark and I spent late evenings teaching Esther how to use the computer someone had donated to the orphanage. Esther was one of the few Burmese there who was fluent in English. I fired up MS Word and told her to type away.

The first line she typed was:

I am happy today.

The sheer simplicity of her statement still leaves me in awe even now.

Continue reading Png, That Is. »

James Seng Must Step Down

Some background for the sake of proper archiving. If you haven’t witnessed the debacle at Tomorrow.sg, this was the original post, and these were the comments readers had. Kevin sums it all up quite nicely.

But this much is now evident:

James Seng (affectionately known online as Jseng) needs to step down from his position as an editor on Tomorrow.sg. He has a lot on his plate, and I’m sure he could do with more time to play his World of Warcraft game.

It is fitting that Channel NewsAsia ran a story on the recently deceased President Devan Nair, that “he once said his only regret in life was to allow himself to be persuaded to occupy a highly ceremonial office so contradicted by his temperament”. This is true of Jseng as well.

His online persona is caustic, in-your-face, inappropriate and unapologetic. Even people on his side of online arguments wished “he’d shut up”. He describes himself as “an asshat”.

All these things make for a terrible community leader. He’s probably a pretty good coder. I’ve seen his Movabletype anti-spam plugin and I must say I’m impressed. But as a moderator for Tomorrow.sg, it’s a bad fit. You don’t call your users asshats, dim wits and idiots and get away with it. He has become detrimental to the Tomorrow.sg community.

I would have left it were it not for the fact he moved all the comments from the thread regarding the Idledays fund to “C’mon Let’s All Bash Tomorrow.sg”, which he wrote.

This takes the cake. I’d have expected James Seng, of all people, to understand the tenets of data integrity. You do not change the content of a post because the comments didn’t go your way. It’s not just found in Journalism 101, it’s Common-sense 101. He single-handedly labelled everyone’s comments as Tomorrow.sg bashing because he had the power to do so.

I’m asking that he either relinquish that power, or that it be taken away from him.

There are places asshats don’t belong.

I suppose I ought to pen down my thoughts before the events of the past few days disappear in a sea of frenetic everyday activity. The next few posts will probably be stuff I wrote on paper while in Myanmar - pen-and-paper photographs of thoughts and feelings. This post is kinda like a background of sorts. And a little foreground.

Many years ago Faith and I visited a man on his deathbed. I didn’t know him well, except that he was the brother of someone we knew at church. Uncle Patrick Leong was probably in his fifties or sixties then.

We went there to cheer him up. We thought maybe praying with him would strenthen his spirit. There, lying upon what would be his deathbed was the most cheerful person we had ever met. He joked about everything under the sun, even his now uncontrollable bodily functions. Then somewhere in our short visit he told me that I needed to visit the orphans in Myanmar. He told me that they needed us.

Uncle Patrick then prayed for Faith and I.

I left the hospital in a state of contemplative shock that day. I’d known that my father named me after a missionary in a hope, now probably forgotten, that I’d choose to be one too. To be cheered up and prayed for by a man whom I thought needed cheer and prayer was a role reversal made possible only by God’s work upon his life. Nothing; not sickess nor death could dim the light that shone so brightly. And for that moment God’s light, reflected off this man, showed me the way I was to go.